‘The thickness of shadows’ is the title of a group of pieces  I exhibited, and an artist’s talk  I presented at the International Conference “Twice Upon A Time: Magic , Alchemy and the Transubstantiation of the Senses.” at Birmingham Institute of Art and Design, BCU, Centre for Fine Art Research (CFAR).

The work referencing the photograph as object is presented in an occluded form. Each  monochrome image  in a grey box is backlit to give the essence of an eclipse making the image just discernible. In order to see the image one has to get close to overcome the visual power of the light. The light has the effect of drawing one in – if one chooses to do so. At the same time, as one becomes used to the darkness, the abstract images gradually appear as seething masses of black, pinpricks of light showering like galactic storms, a breaking oily coal black mass, ocean waves or sparkling liquidity in a primeval forest. They can appear to be holographic, extending into the space of the viewer The high gloss surface of the photographs also reflect the viewer and light from other works in the installation. There is movement and presence from outside the image.

The works explore the relationship between photography and material. The material of the physical and the transcendent. There is reference to painting. The painting being material, object and image. The photograph is an object with an image of an object. The image is a window. The objects in these photographs are shadows of and the objects of the photographs cast shadows, as do the objects containing the photographs. There is a curious interplay of physicalities, which lead to a feeling of ‘otherness’. 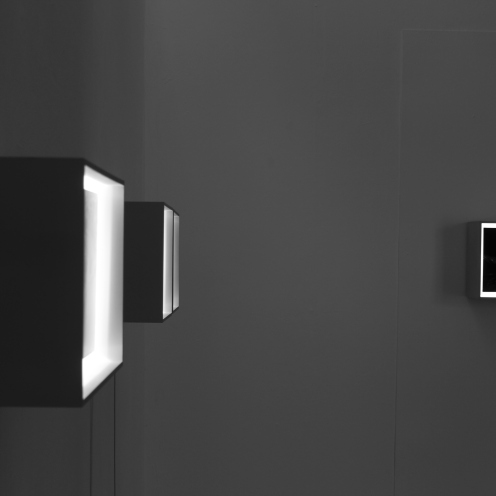